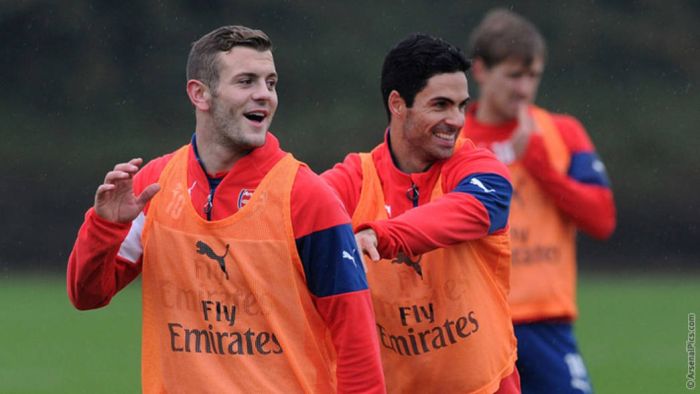 Arsenal manager, Mikel Arteta, has said Jack Wilshere is welcome to come and train with his squad.

Wilshere is still without a club after he was released by Bournemouth.

The former England international left the Championship side at the end of last season and recently trained with Serie B side, Como.

However, a deal couldnâ€™t be done as the midfielder doesnâ€™t have an EU passport.

The 29-year-old was once tipped to be the next big English talent but has been plagued by injuries all through his career.

Arteta played alongside Wilshere during his time at Arsenal and may have offered his former teammate a lifeline as he looks to salvage his career.

He was asked on Thursday if Wilshere could train at their London Colney facility and he said:

â€œHe is someone that I know who I shared the dressing room with, who is so loved around the club with every person here and our doors are always open.â€

Click here Chelsea defender, Marcos Alonso has given his verdict on the clubâ€™s new signing, Saul Niguez. Chelsea completed their loan deal to sign Saul from Atletico Madrid on deadline day. They also have the option to make the Spain midfielder stay at Stamford Bridge permanently for Â£30 million next summer. Saul is in line…

Click here Report has it that no fewer than 5,540 applicants have applied for the 100 vacancies approved by the Nasarawa State Government at Isa Mustapha Agwai Polythecnic, Lafia. The Rector of the Polythecnic, Dr. Justina Kotso, made the disclosure on Tuesday in Lafia when the management of the institution appeared before the State House…

DCLM Daily Manna 2 September 2021 Devotional By Pastor W. F. Kumuyi — Feasting On Plagues TOPIC: Feasting On Plagues TEXT: Numbers 11:31-35 31 And there went forth a wind from the LORD, and brought quails from the sea, and let them fall by the camp, as it were a day’s journey on this side, and as…

Posted by OluwaFemi. on Sep 10, 2021 under Sports    0 Sports Jurgen Klopp says the “only people who get punished are players and clubs” as Liverpool’s Brazil players face a ban this weekend over Covid-19 protocols. Liverpool boss Klopp says he remains unsure if Alisson and Fabinho can face Leeds in the Premier League…

DJ OP Dot is out with another super dope mix themed on the sound of 2 female Afrobeat stars, Ayra Starr and Tems. This mix is coming at the right time when Afro-beat is taking the center stage globally and Nigeriaâ€™s female singers are also getting credit for the genre has become now. While Tems…

Click here The National Agency for Food and Drug Administration and Control (NAFDAC) has cautioned Nigerians against the consumption of foods and drugs which are injurious to their health. The Director-General of the agency, Professor Mojisola Adeyeye, gave the warning during a sensitization campaign in the North Central zone held in Ilorin on Thursday. The…