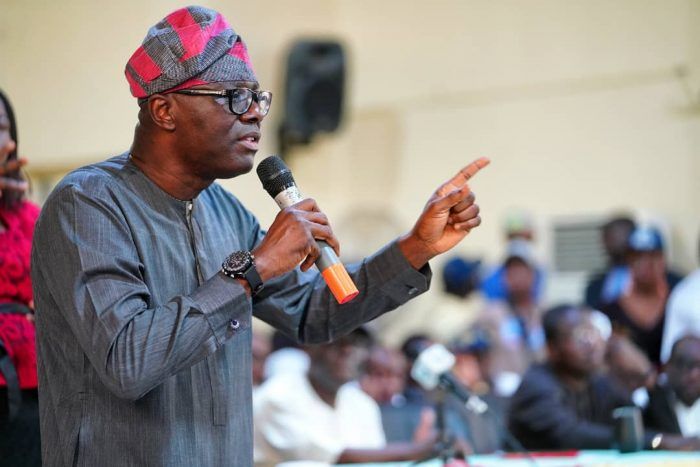 Lagos State Governor, Mr. Babajide Sanwo-Olu, on Tuesday said he would not interfere with the ongoing selection process that would lead to the appointment of the substantive Vice Chancellor of the state-owned Lagos State University (LASU).

The Governor said he does not have personal interest in who becomes the next Vice Chancellor of LASU and therefore has no intention to influence the process, adding that due process would be followed in the appointment.

Governor Sanwo-Olu made the statement while receiving members of the Committee of Vice Chancellors of Nigerian Universities (CVCNU) led by its chairman, Prof. Samuel Edoumiekumo, who paid him a courtesy visit at the Lagos House, Ikeja on Tuesday.

â€œI have no intention to interfere or have any interest in the choice of who would be vice chancellor. We have put in the committee men and women of impeccable character that have distinguished themselves and are willing to do for us a good job,â€

Our NaijaMusic Thursday Throwback hit song goes to Davido – Ekuro one of OBO’s first hits in his music career. DMW boss Davido turned 26 yesterday, hence we decided to give a throwback to one of his finest tunes from the past “Ekuro’. CHECK OUT: Davido x Trey Songz – Wetin You Say The tune was…

Ahmed Musa is two games away from breaking the Super Eagles record of appearances. The number stands at 101 caps and is held by both Vincent Enyeama and Joseph Yobo. Musa earned his 99th international cap as Nigeria beat Liberia 2-0 in a World Cup qualifying game on Friday. The 28-year-old replaced Kelechi Iheanacho in…

Vice President Yemi Osinbajo led prayers for Nigeria on Sunday during his visit to two worship centres in Abuja. At the All Saints Anglican Church in Wuse Zone 5, and the Redeemed Christian Church of God (RCCG), City of David Parish, Utako, the VP, clergymen and congregants prayed for an end to insecurity. Osinbajo and…

Click here The Minister of Police Affairs, Maigari Dingyadi, has said that former acting Chairman of the Economic and Financial Crimes Commission, CP Ibrahim Magu, is still on the Federal Governmentâ€™s payroll as a police officer despite his suspension by the President, Major General Muhammadu Buhari (retd). The minister spoke on Tuesday when he featured…

Click here Argentina captain, Lionel Messi was angered on Sunday over the action of Brazil health officials who waited for their World Cup qualifier to start before storming the pitch with policemen to arrest four Premier League players. The PSG player wondered why the officials should wait until the match had started to create such…

Download: Big God – Righteousman Award-Winning veteran Nigerian gospel reggae powerhouse Righteousman offers a brand new single titled, “Big God.” Speaking on the song, the Praise Affairs International Signee says “We have and serve a “Big God” who loves and cares for us unconditionally.” The new single is one of many, credited to Righteousman. This…